TBD vs. TBD no more!

Strawweight veterans Marina Rodriguez and Michelle Waterson will jump to flyweight and take over headlining duties for the upcoming UFC Vegas 26 mixed martial arts (MMA) event, scheduled for this Sat. night (May 8, 2021) on ESPN and ESPN+ from inside APEX in Las Vegas, Nevada.

That’s according to an Email sent by ESPN.

The original main event between TJ Dillashaw and Cory Sandhagen was postponed after Dillashaw suffered a deep cut above his right eye roughly a week before fight night. The plan is to rebook their 135-pound title eliminator as soon as the former champ is all patched up and ready to go.

Rodriguez (13-1-2) is coming off a technical knockout victory over Amanda Ribas at the UFC 257 pay-per-view (PPV) back in January. The 34 year-old Brazilian blasted her way into the Octagon with a first-round finish over Maria de Oliveira Neta on Dana White’s “Contender Series” in summer 2018.

As for Waterson (18-8), she’s also looking to win her second straight after capturing a split-decision victory over the rough-and-tumble Angela Hill last September. “The Karate Hottie” is ranked three spots below Rodriguez at No. 9 but could find herself back in the mix with a standout performance this weekend in “Sin City.”

Also competing at the UFC Vegas 26 event are welterweight veterans Neil Magny and Geoff Neal. Elsewhere on the card, Maurice Greene and Marcos Rogerio de Lima hook ‘em up in heavyweight action, while Diego Ferreira and Gregor Gillespie try to settle their business at 155 pounds. 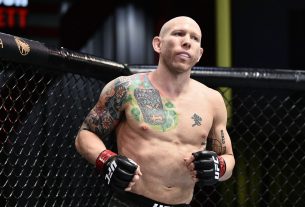