Three UFC Vegas 29 “Prelims” undercard bouts remain to be examined (check out the first batch here), so let’s not delay:

A standout wrestler in her native Japan, Kanako Murata (12-1) won seven straight on her way to UFC, including a decision over Emily Ducote for the Invicta Strawweight title. She kept her momentum going in her Octagon debut, which saw her out-grapple veteran Randa Markos to sweep the scorecards.

She gives up two inches of height and reach to Virna Jandiroba (16-2).

After defeating Mizuki Inoue for the Invicta title and defending it with a submission over Janaisa Morandin, Jandiroba jumped ship to the UFC, where she lost a decision to former champion Carla Esparza. Impressive finishes of Mallory Martin and Felice Herrig carried her into title contention, only for Mackenzie Dern to halt her progress via competitive decision.

She’s ended 13 of her 16 professional wins inside the distance, all of them via submission.

With Tatiana Suarez moving to 125 pounds, Murata now likely boasts the greatest wrestling credentials in the Strawweight division, ostensibly outclassing even a stud grappler like Jandiroba in that area. Murata’s also fearless in the face of dangerous submission artists, as seen in the Ducote fight, so she’ll almost certainly be chasing takedowns here.

Jandiroba’s limited striking means she’ll have to rely on either tapping Murata from her back or swaying the judges with submission attempts. Considering how many near-misses Ducote had, neither of those are particularly infeasible, but I see Murata leaning on constant takedowns and long stretches of top control for the win.

Two years after leaving UFC on a loss to Teruto Ishihara, Julian Erosa (25-8) knocked out Jamall Emmers on the Contender Series to punch his return ticket, but soon found himself back on the regional circuit after three consecutive defeats. Then came a late-notice opportunity against Sean Woodson, whom Erosa submitted in a “Performance of the Night” effort before knocking out Nate Landwehr.

He has knocked out and submitted 11 opponents apiece.

Seung Woo Choi (9-3) didn’t have the smoothest of Octagon starts, falling short against unbeaten Movsar Evloev and once-beaten Gavin Tucker in his first two efforts. He has since gotten back on track by beating Suman Mokhtarian and Youssef Zalal, the latter on the heels of a 13-month layoff.

Both of these men impressed me greatly in recent efforts, Erosa by wearing down a far superior boxer in Woodson and Choi by completely shutting down Zalal’s wrestling after previously struggling to keep fights standing. They have the tools to exploit one another’s weaknesses, making this a pick-‘em like almost every other Prelim in this lineup, but Choi seems the better-equipped of the two. Erosa’s still too eager to compromise his range and trade heat, which will end in disaster against a more durable brawler like Choi, and “Juicy J’s” seemingly improved wrestling won’t find any more success than Zalal’s did.

While he’s exceeded my expectations before, I still don’t trust Erosa against a solid puncher whom he can’t reliably take down. In the end, Choi clips him sometime in the second.

The unsuccessful The Ultimate Fighter (TUF) bid for josh Parisian (13-4) and subsequent loss to Brett Martin gave way to six consecutive (technical) knockouts, the last of which saw him stop Chad Johnson in his second “Contender Series” appearance to earn a UFC contract. His debut pitted him against Parker Porter, who welcomed him to the world’s largest fight promotion by beating him in a war of attrition.

He has knocked out 10 professional foes and submitted two others.

Roque Martinez (15-7-2) enjoyed a lengthy run on the Japanese circuit, cutting his teeth in both DEEP and Riziin from 2017 to early 2020. He’s yet to claim his first Octagon victory, tapping to Alexander Romanov and dropping a decision to Don’Tale Mayes two months later.

He is the shorter man by six inches and gives up seven inches of reach.

Despite considerable advantages in height and reach, Parisian allowed Porter to march his way inside and wear him down at close range last time out. I don’t see him having much more success against another squat slugger in Martinez, who despite his fluffy physique has a clear edge in cardio and the durability to drag Parisian into deep water.

That said, Martinez did take a while to really start walking down Mayes, but Parisian’s much less adept at utilizing his range than “Lord Kong” and figures to fade far more quickly. As long as he commits to staying on the front foot, Martinez beats Parisian up in the pocket for an increasingly one-sided decision.

Top to bottom, this is one of the most closely matched cards you’re likely to see. Indeed, anything can happen, so be sure you’re around to enjoy it. See you Saturday, Maniacs. 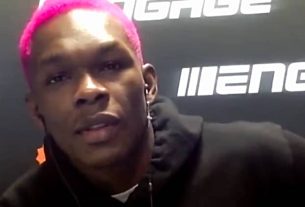 Coach discusses Dan Hooker’s loss to Michael Chandler: “On any particular day, anyone can win, anyone can be champion”