It doesn’t appear Nick Diaz has lost his confidence after more than six years away from fighting.

For many years there was a strong belief Diaz would never make a comeback. He seemed to enjoy his life outside of competition, but now is ready to resume the activity he’s known best for as he pursues his first victory since battering B.J. Penn to a decision at UFC 137 in October 2011.

Much of Diaz’s preparation for UFC 266 has come in the shadows, as he’s released barely any training footage and done even less media.

Video: 17 years later, what can we even expect from the Nick Diaz-Robbie Lawler rematch?

As the Sept. 25 event, which takes place at T-Mobile Arena in Las Vegas and airs on pay-per-view following prelims on ESPNNews and ESPN+, draws near, though, Diaz can’t avoid the spotlight.

The promotion released a snippet of its upcoming “UFC Countdown” show, and Diaz gave brief comments about how he’s well prepared and feeling “dangerous” going into his second encounter with Lawler. He won the first meeting by second-round knockout at UFC 47 in April 2004.

“I’m actually way more of a dangerous fighter than I was when I fought Robbie Lawler the first time,” Diaz said. “I’m going to be really unstoppable having made the right decisions.”

We’re counting down the days until the return of @NickDiaz209 at #UFC266! pic.twitter.com/KXqqeWUWmN

Lawler told MMA Junkie on Wednesday that he doesn’t expect a drop-off in Diaz’s skillset despite the long hiatus. He expects Diaz to “try to beat my ass” on fight night, and there’s no denying that will be his game plan.

The rematch between Diaz, 38, and Lawler, 39, will serve as the second fighter UFC history to be scheduled for five rounds when it’s neither a main event nor a title fight. How 25 minutes opposed to the standard 15 factors into the contest remains to be seen, but Diaz appears ready.

Not a man of many words, Diaz said simply that he’s going to put on a repeat performance against Lawler, but this time coming from a better version of himself. 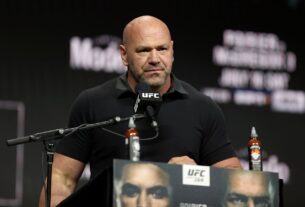