After more than a year on the sidelines, thanks to a debilitating case of COVID-19, undefeated welterweight prospect Khamzat Chimaev (9-0) will finally make his return to the Octagon opposite Li Jingliang (18-6) as part of the UFC 267 pay-per-view (PPV) event on Oct. 30 in Abu Dhabi.

That’s according to the number crunchers over at Draft Kings, who pegged Jingliang as the +300 underdog. That line is surprising when you consider the 33 year-old “Leech” has won eight of his last 10, including last January’s knockout win over welterweight slugger Santiago Ponzinibbio.

The bot-friendly Chimaev has certainly been impressive in his first three fights for UFC, but “Borz” has yet to defeat anyone ranked in the Top 15. The part-time middleweight is coming off a knockout win over hot-and-cold veteran Gerald Meerschaert, his second-straight first-round finish.

UFC 267 will be headlined by the light heavyweight title fight between champion Jan Blachowicz and challenger Glover Teixeira. Elsewhere on the card, bantamweight titleholder Aljamain Sterling puts his strap on the line opposite former champion Petr Yan.

For the latest UC 267 fight card and lineup click here. 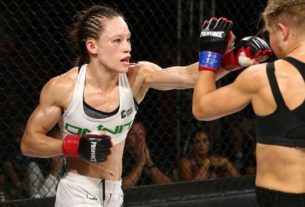 Cris Cyborg happy to be away from UFC, starting fresh in Bellator