Skip to content
Nick Diaz reacts to UFC 266 loss to Robbie Lawler: ‘I knew I had it coming’

Nick Diaz competed for the first time in over six years Saturday and he wasn’t totally surprised the result didn’t go his way.

From the moment Cormier introduced Diaz, the crowd voiced their approval of the Stockton, Calif. representative. As Diaz wiped his nose, he smiled.

Diaz, 38, then reiterated a sentiment he vocalized during an ESPN interview Wednesday. He was puzzled by how the rematch against Lawler (29-15 MMA, 15-11 UFC) got set up and indicated old members of his management group may have not been clear about their business moves.

“I don’t know how this fight got set up,” Diaz said. “I had a switch-up in my whole management set-up and the way the fight got set up. It was just a bum wrap. But no excuses. I had it coming. He was in great shape. I knew I was leaking here, so I didn’t want to make too much of a mess. I’m glad to be back. I’m glad I put on a good show for you.”

Prior to UFC 266, Diaz hadn’t fought since January 2015 when he lost to Anderson Silva at UFC 183 in a fight that would later be overturned to a “no contest” due to a positive drug test by “The Spider.”


Nick Diaz reacts to UFC 266 loss to Robbie Lawler: ‘I knew I had it coming’ 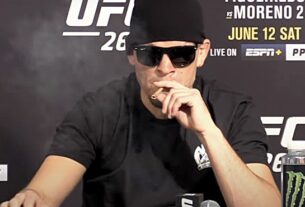 NSAC rules not to discipline boxers, MMA fighters for marijuana use