Chael Sonnen is unable to resist joining the party whenever it comes to making fun of Jon Jones.

Many would say that Sonnen is usually the life of these parties. His list of attacks, quips, and roasts of Jones is enough to fill a decent-sized book of quotes if not a full-length style guide for aspiring professional trolls. Sometimes Sonnen’s remarks are seemingly out of the blue, other times it’s the case of a “Bad Guy” exploiting an opening or lapse of judgment from his target.

After Jones’ latest arrest for battery domestic violence and injuring/tampering with a vehicle, Jones vowed to remove alcohol from his life forever, with the implication being that alcohol was the chief catalyst of anything that transpired that night. Sunday, Jones took to Twitter to provide an update on his journey of sobriety.

“Be sober-minded; be watchful. Your adversary the devil prowls around like a roaring lion, seeking someone to devour.” My family, my life, my career could’ve been over after what happened in Las Vegas. But God had other plans for me. 60 days sober and counting,” Jones posted.

Soon after Jones posted this, MMA reporter Mike Bohn pointed out that it had actually been 58 days since Jones’ arrest in Las Vegas. Jones’s long-time nemesis Daniel Cormier found this discrepancy to be “hilarious.”

Instead of joining Cormier in the laughing audience, Chael P. Sonnen decided to be the jokester for the mass of his fellow Jon Jones detractors. “The Bad Guy” tweeted out a message to Jones to ensure he actually knew what sobriety meant in light of his calculating error.

“Hey DUM-DUM It’s supposed to be 60 days sober IN A ROW, NOT 60 days sober since you’ve been OLD ENOUGH to DRINK -Savvy?” Sonnen posted.

There is a chance Jones may never come across this message, as he blocked Sonnen on Twitter earlier this year. Sonnen considered that move by Jones to be a victory in what was a longstanding Twitter feud that spanned years. Even so, Sonnen continues to get shots in after the bell, including whenever Jones lets his guard down in the ongoing battle against his demons.

What are your thoughts on this message Chael Sonnen relayed to Jon Jones regarding Jones’ sobriety?

Continue Reading Chael Sonnen Has A Message For ‘Dum-Dum’ Jon Jones About Sobriety at MMA News.

Welt! You kneed to check out the swelling on Aleksandar Rakic’s leg 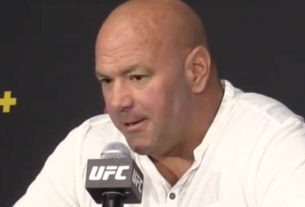