Bryce Mitchell will get his most high-profile fight yet in his return to the octagon when he takes on Edson Barboza.

After more than a year away from competition due to injury, Mitchell (14-0 MMA, 5-0 UFC) is expected to return against Barboza (22-10 MMA, 16-10 UFC) in a featherweight matchup at the UFC’s March 5 event, which does not have a date or location.

MMA Junkie verified verbal agreements are in place for the bout with multiple people close to the situation, who requested anonymity because UFC has yet to make an official announcement.

Mitchell, 27, last competed at UFC Fight Night 181 in October 2020 and earned a unanimous decision over Andrei Fili. He’s No. 12 in the latest USA TODAY Sports/MMA Junkie featherweight rankings and has earned all nine of his career stoppage victories by submission.

Barboza, 35, an honorable mention in the latest rankings, will attempt to rebound from a third-round TKO loss to Giga Chikadze in the UFC on ESPN 30 headliner in August. The Brazilian is 2-2 since he dropped to 145 pounds in May 2020. 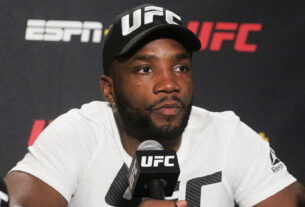 Video: Was Leon Edwards nuts to say he should’ve been next for Kamaru Usman?