Ngannou Accuses UFC Of Setting Up Backstage Run-In With Gane

The UFC is as real as it gets, but Ngannou thinks they may have staged a ‘chance’ encounter backstage with upcoming opponent Gane.

Backstage at UFC 268, UFC cameras happened to capture a chance moment between heavyweights Francis Ngannou and Ciryl Gane, who are set to fight at UFC 270 on January 11th. Ngannou, who was in town to support fellow African champ Kamaru Usman, passed Gane in the hallway, who was cornering Nassourdine Imavov.

Ngannou and Gane were teammates for years at the MMA Factory under head coach Fernand Lopez. But when Ngannou walked by Gane, Lopez, and Imavov, he cold shouldered them completely. No smile, no nod, not even a glance.

Well, Francis Ngannou was asked why during a new interview with Daniel Cormier, and it sounds like he kinda froze in the moment and erred on the side of caution, given the sour relationship between himself and Lopez.

“The only thing that bothers me a little bit [was Gane]… and he was right,” Ngannou said (via MMA Junkie). “I would’ve looked confused. Obviously, as his coach said, he’s naïve. I would’ve been confused, too, because If I walked by Gane, I would say hi. If it’s just him, I’d say, ‘Hi, what’s up?’”

With Lopez out there weaving tales surrounding Ngannou’s words, he didn’t want to provide any further potential ammo.

“I mean, like, yeah, I want to be nice,” Ngannou continued. “But when I saw him in that position, I had a few thoughts. I’m like ‘Okay, should I say hi?’ Then I’m like ‘I don’t know.’ I might got closer and say hi and then somehow, you’ll hear that I said ‘this,’ which is not what I said. Getting close to him was giving an opportunity for him. Not only the fact that I’m sure that he didn’t need me to say hi, but it was giving him the opportunity to say something again that I didn’t say. I’d rather stay in the distance.”

“It’s not like we’re friendly. He’s attacking me all the time. I can’t do that. I don’t feel like it.”

Interestingly enough, Ngannou doesn’t think the meeting was completely random. He shared a theory with Cormier that UFC staff might have purposefully made them cross paths on camera.

“There was this lady taking us to our seat and she was bringing us to this section,” Ngannou said. “And then they talked to her over the radio. And then ‘Oh, sorry, I’m wrong.’ She turned around and we get back [to where Gane was]. I mean, tell me how this can be a coincidence.”

“And when you look, by the time I come from the corner, the guy was ready with his camera. Like, if you watch that video, he was on me by the time I turned around the corner and just zooming on me like, ‘Oh, he’s there! He’s coming!’ Dun dun! Like this movie scene! He was there waiting for it! It’s not like you see somebody and you’re like, ‘Oh, let me film.’ Like, come on. His camera wasn’t just there ready to film something if ever something happened. No, he’s waiting.”

We have to admit, it did seem like the cameraman was right there waiting for that perfect walkby moment, and he captured it so well too. What do you think, Maniacs? Is Ngannou being paranoid? Or did the UFC manage to create some drama that the WWE would be proud of? 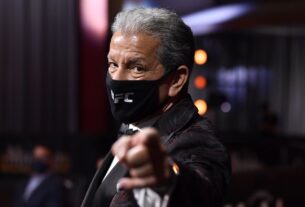