On Thanksgiving Thursday, Kavanaugh took to social media with a nicely designed invitation card designed to lure White over to the upcoming event.

The tone of the card is clearly in jest, as Kavanaugh attempts to mix in friendliness with snarky (via Instagram):

“Dear Dana – Since Fight Club has broken every UFC viewership record, I thought perhaps you would want to see a proper production in action,” Kavanaugh wrote. “We would be more than happy to arrange a tour and a personalized autograph.”

It’s safe to assume White won’t be clamoring to take Kavanaugh up on his offer. The UFC’s head honcho has shown a frequent disdain for Kavanaugh and Triller’s approach to fight promotion.

“Who gives a sh*t? Does anybody give a sh*t? You do? I don’t give a sh*t what they think,” White said during a tirade toward Triller back in May. “You think I care what Triller thinks? I don’t even take their calls. This idiot calls me every day. He calls me every day: ‘Please answer my call. Please talk to me. Why won’t you talk to me?’ Because I don’t give a f*ck about you. Do your thing. Leave me alone. Go f*cking do whatever it is you’re doing. Knock yourself out.

“I (couldn’t) care less. I have no interest in talking to any of those idiots. They can do their thing. Do your thing. Stop talking about me. What do you give a sh*t what I’m doing? Go do your thing.”

Triller Triad Combat takes place at Globe Life Field in Arlington, Texas. The event streams via online pay-per-view on Fite.tv, and will debut a new ruleset in the combat sports space.

Fighters will compete in a triangular ring and under two-minute rounds. The idea is to set professional boxers against professional MMA fighters in an environment that’s “leveling the playing field.”

Like in boxing, only punches will be allowed. No kicks or elbows are permitted in Triad Combat. What does differs from boxing, is that this new fighting style will allow clinching and striking from the clinch. 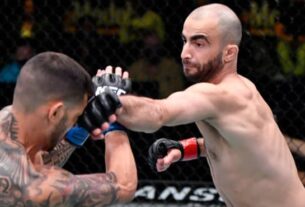