UFC featherweight contender Giga Chikadze is no longer a fan of Alexander Volkanovski after recent tensions between the two top 145 pounders.

Chikadze had called for the next title shot against Volkanovski after the champion’s original UFC 272 opponent, Max Holloway, pulled out with an injury. Volkanovski and the UFC opted to go with Chan Sung Jung, otherwise known as ‘The Korean Zombie’, as a replacement.

Chikadze volunteered to make a quick turnaround from his upcoming fight to fill in against Volkanovski, but the UFC had other plans.

During a recent interview with MMA Fighting, Chikadze was asked about whether or not he had lost respect for Volkanovski.

“Absolutely, yeah,” Chikadze said. “Before that, I kind of messaged him after his last fight, I congratulated him,” said Chikadze. “Brother, this (Volkanovski’s response to me on Twitter) is a cheap move for me to see. He messages me, he tweeted that I’m fighting a top five or something, and like, I lost a lot of respect for him. And plus, bro, I’m not here for respect and all this stuff. No friends for me. These guys, I’m here to take over everybody, smash, you know, I don’t need extra friends here. I feel like these people are trying to take my dreams, so I’m gonna fight them.”

Chikadze will face Calvin Kattar in a second straight main event at UFC Vegas 46 this weekend. In his last fight, he put on a dominant performance over Edson Barboza and ended up earning TKO victory.

Chikadze has long been considered by many to be the dark horse of the featherweight division. After losing out on a contract on Dana White’s Contender Series, he’s won nine fights in a row over the likes of Cub Swanson, Omar Morales, and Barboza. For these reasons, Dana White allegedly told Chikadze that he’s close to earning the next shot. Another impressive win over Kattar is the first step to making that happen.

How do you think a Giga Chikadze vs. Alexander Volkanovski fight would play out? 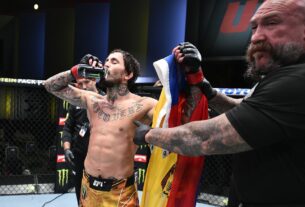