Javier Mendez is confident that both of his pupils in Khabib Nurmagomedov and Islam Makhachev would beat Charles Oliveira with ease.

Oliveira is the current UFC lightweight champion and defended his belt for the first time in December with a submission win over Dustin Poirier. He is now likely to face Justin Gaethje sometime in the spring or summer. And should he win that, a bout against the winner of Makhachev-Beneil Dariush will be next.

Although Oliveira has looked dominant since he became the champ, American Kickboxing head coach Javier Mendez believes the former champ Nurmagomedov as well as Makhachev would be able to defeat the Brazilian.

Of course, Nurmagomedov is retired and doesn’t seem too interested in ever returning to the Octagon again. However, there is a very real chance Islam Makhachev and Charles Oliveira fight in 2022 so we can see if the Dagestani fighter would really beat the Brazilian and become the new champion.

In order for him to even get the title shot, he will need to defeat Dariush in the main event of a Fight Night card on February 26. This is easier said than done, as Dariush has been on an incredible run. However, Mendez believes it is only a matter of time before Makhachev does what his longtime friend and teammate did: become the undisputed UFC lightweight champion.

Do you think Islam Makhachev and Khabib Nurmagomedov would beat Charles Oliveira? 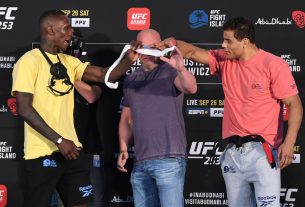