Having competed against both men, Robert Whittaker broke down the pivotal matchup between Jared Cannonier and Derek Brunson.

On the same night that Whittaker (23-5 MMA, 14-3 UFC) will attempt to reclaim his middleweight title from Israel Adesanya in the UFC 271 main event Feb. 12, Cannonier and Brunson will be vying for the No. 1 contender spot.

“I think Cannonier takes that one,” Whittaker told MMA Junkie. “He’s a tough dude with a very, very well-rounded skill set. (He’s a) super hard dude to take down and keep down, more importantly. I think if Derek Brunson wins that fight, he takes him down, holds him down, pressures him out and wins that way. It’s very hard to keep Cannonier down.

“I don’t see how he can hold him down, especially just over three rounds, not five. I think that makes a difference. I think Cannonier is a tough dude, he hits hard, he’s got good eyes and he’s got excellent wrestling takedown defense – not to mention his own physical prowess going into it.”

Since losing four of six bouts, including knockout losses to Whittaker and Adesanya, Brunson has won five straight en route to a potential shot at redemption against either man.

It’s been a remarkable turnaround for the 38-year-old Brunson, but Whittaker isn’t surprised to see his career resurgence.

“I think he’s a super high-tier, high-caliber opponent,” Whittaker said. “He’s a super high-quality athlete. Look at the guys he’s lost to, really – the top dogs. So I definitely – you saw him coming up to fight me and then you saw it on the backend of it, after he lost to me and Izzy (Adesanya), and he’s just cleaning out again. Yeah, he’s a very, very high-caliber fighter.” 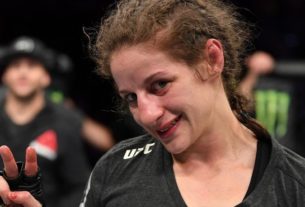