Zhang Has No Regrets After 2nd Namajunas Loss, Makes Vow For Future

UFC women’s strawweight contender Zhang Weili says she has no regrets about her second defeat to Rose Namajunas at UFC 268, and has vowed to come back stronger.

Heading into 2021, Zhang held the 115-pound gold, was riding a 21-fight win streak, boasted a perfect 5-0 UFC record, and already had a successful title defense over the great Joanna Jędrzejczyk under her belt. But while 2020 saw her extend her reign in style in a Fight of the Year contender, last year was less successful for the Chinese star.

At UFC 261, Namajunas provided one of the most memorable moments in the promotion’s history, knocking Zhang out with a first-round head kick in front of the first sold-out crowd in over a year. In doing so, “Thug Rose” became the first woman in UFC history to regain a title.

Seven months later, Zhang had her chance for redemption. In the UFC 268 co-main event, she went five round with the champ inside Madison Square Garden. While many believed “Magnum” did enough to leave the Octagon with the belt back in her possession, Namajunas was awarded the nod on two scorecards.

After her KO loss last April, Zhang was visibly unhappy at the stoppage and seemed reluctant to accept the result. She made a number of comments about the defeat in the following months, including a claim that Namajunas made disparaging comments about her in the build-up in order to turn the fans against the-then strawweight queen, as well as a suggestion that Chris Weidman’s leg break played a part in the result.

However, Zhang’s response to her November setback couldn’t have been more different, despite the incredibly tight nature of it. That positive attitude was clear in a recent interview with People Magazine in China. “Magnum” claimed the defeat has provided her with an opportunity to learn and grow, something she says has built a “new me.”

“Failure is not a bad thing for us. It’s a beginning for us to learn and become stronger. Now I start anew. I’m a new me. A new ‘Beijing Drifter’. I will keep grinding for my dream.”

Despite back-to-back losses, Zhang insists she has no regrets about her UFC 268 performance and is not at a low point in her career. Instead, “Magnum” believes she’s on an upwards surge, and is solely focused on accomplishing her goals when she returns to the Octagon this year.

“I don’t think I’m at a low point right now,” Zhang said. “I think I’m at the point of a final sprint, a point of sprinting upwards.

“There’s no need to regret the past or worry about the future. Just focus on accomplishing every single thing in the present. Eat well when it’s time to eat. Train hard when it’s time to train. Do your best at whatever it is you are doing and the future will not be too bad.” (h/t South China Morning Post)

While her next opponent is yet to be decided, Zhang is seemingly working hard to get back to her best for her next outing. In an exclusive interview with MMA News, Eddie Cha recently revealed Zhang will be returning to the Fight Ready gym in the next few weeks.

When she does begin training again with the likes of Cha and Henry Cejudo, we can expect a fight announcement to come relatively quickly, perhaps in the form of a rematch against Jędrzejczyk.

Do you think Zhang Weili will bounce back to the title in the coming months and years?

Zhang Has No Regrets After 2nd Namajunas Loss, Makes Vow For Future 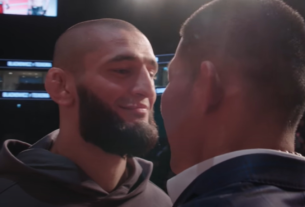