We’ve got four UFC 280 “Prelims” undercard bouts left to sift through (check out the first batch here), so grab your reading glasses and dig in …

Belal Muhammad (21-3) bounced back from a 1-2 UFC start to win four straight, only to run afoul of Geoff Neal at Barclays Center in Brooklyn, New York. He now finds himself in the midst of an eight-fight unbeaten streak, most recently avenging the sole knockout loss of his career with a decision over Vicente Luque.

Eight months after knocking out Taj Abdul-Hakim in the second defense of his Cage Fury title, Brady got called up to the Octagon, where he defeated Court McGee in his debut. He’s been similarly successful in four subsequent fights, among them an arm-triangle choke finish of Jake Matthews.

His seven finishes include four by submission.

The big question mark here is Brady’s gas tank. While Muhammad has the better overall resume, Brady’s more proven against high-level wrestlers, having out-dueled Matthews and Michael Chiesa in their wheelhouses. When both men are fresh, I trust Brady to hold his own in the sorts of grinding, close-quarters slogs that are Muhammad’s bread and butter.

Brady definitely faded late against Chiesa, however, and Muhammad’s gas tank is his best weapon. If Brady enters the cage in similar condition, Muhammad has the pace to wear him out and take over before Brady can bank two rounds. While acknowledging that I constantly underestimate Muhammad, though, I’m leaning toward Brady, who’s done well in high-pace wars of attrition before. In the end, he racks up enough top control to sway the judges.

Makhmud Muradov (25-7) ended a year-long layoff by knocking out Andrew Sanchez with a flying knee to secure his second consecutive post-fight bonus. He looked poised to make it 4-0 in the Octagon against Gerald Meerschaert, but succumbed to one of “GM3’s” signature comeback submissions.

“Mach” fights for the first time in nearly 14 months.

After earning his second Contender Series victory in three weeks, Caio Borralho (12-1) kicked off his UFC career with a dominant technical decision over Gadzhi Omargadzhiev. His subsequent bout with Armen Petrosyan wasn’t quite as thrilling, but he still emerged victorious thanks to a persistent wrestling attack.

Is there a word for, “is going to lose, but not as badly as the oddsmakers think?” Muradov’s constant movement and four-inch height advantage could be a real problem for Borralho, who does his best work in close. “Mach’s” power and takedown defense are nothing, either, and we saw Borralho struggle to impress against another mobile kicker in Petrosyan.

That said, Meerschaert’s ability to force Muradov to the fence through sheer damn-the-torpedoes relentlessness was a bad look for the Uzbek, especially since Borralho’s a better takedown artist than “GM3.” Even if Muradov does manage to play keep-away in the early going, it’ll only get harder as the fight progresses and Borralho starts racking up damage on the ground. In short, “The Natural” finds his neck or pounds him out in the latter half of the fight.

The perfect (3-0) UFC start for Volkan Oezdemir (18-6) gave way to a 2-5 skid that saw him suffer stoppage losses to Daniel Cormier, Anthony Smith and Jiri Prochazka along the way. He last saw action in July 2022, when he snapped a two-fight skid by out-working Paul Craig in a stinker.

Two years after his sudden exit from the Octagon, Nikita Krylov (28-9) made his return in Sept. 2018, only to lose four of his next six bouts. With his back against the wall, “The Miner” scored arguably the biggest win of his career by smashing Alexander Gustafsson in just 67 seconds.

His 27 stoppage wins include 15 by submission.

Even in defeat, you can always trust Krylov to give it everything he’s got. The fights he loses are never because of lack of effort. The same can’t be said of Oezdemir, who hasn’t turned in a truly eye-catching performance in years. On top of that, Krylov is the more durable of the two, and Oezdemir doesn’t have the wrestling prowess to shut down “The Miner” like Glover Teixeira or Magomed Ankalaev.

Oezdemir has given good strikers plenty of trouble before, but Krylov’s sheer horsepower seems like more than he can handle at this point in his career. When the dust settles, Krylov overwhelms him for a quick finish.

He gives up three inches of height and reach to Lucas Almeida (14-1).

Though he beat the stuffing out of Daniel Zellhuber in the first round of their Contender Series clash, Almeida’s inability to maintain his pace led to his first career defeat. After returning to Brazil to defend his Jungle Fight title, Almeida got his shot in the Octagon, knocking out Mike Trizano to take home “Fight of the Night” honors.

All of his wins have come inside the distance, nine of them by knockout.

I was initially going to call an Almeida upset, as Tukhugov’s inconsistency and history of late-round collapses loom large whenever I think of him. After rewatching parts of his most recent win over Ricardo Ramos, however, I’ve flip-flopped. His counter punching looked razor-sharp, and Almeida showed a vulnerability to getting caught coming in when he warred with Trizano. That’s not even mentioning his wrestling attack, which should further open up his striking and give him a means to slow things down if Almeida starts building momentum.

Not saying Almeida doesn’t have a reasonable chance of weathering Tukhugov’s early explosion to take over down the stretch, but he’ll have to wade through a whole hell of a lot of fire to do so. Long story short, Tukhugov clips him with an early counter and pours it on for a decisive finish.

UFC 280 is a PPV event worthy of the designation, and there’s a lot to be said for that. See you Saturday, Maniacs.

Remember that MMAmania.com will deliver LIVE round-by-round, blow-by-blow coverage of the entire UFC 280 fight card right here, starting with the early ESPNEWS/ESPN+ “Prelims” matches online, which are scheduled to begin at 10 a.m. ET, then the remaining undercard (also on ESPNEWS/ESPN+) at 12 p.m. ET, before the PPV main card start time at 2 p.m. ET on ESPN+ PPV.

To check out the latest and greatest UFC 280: “Oliveira vs. Makhachev” news and notes be sure to hit up our comprehensive event archive right here. 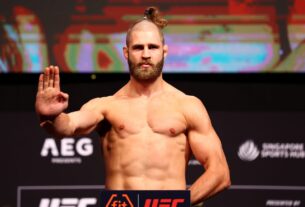