Michelle Waterson reacts to reports of Joanna Jedrzejczyk missing weight: ‘I would still fight her’

UFC strawweight contender Michelle Waterson has given her thoughts on the reports that Joanna Jedrzejczyk will miss weight before this Saturday’s UFC Tampa main event.

“The Karate Hottie” spoke to Andy Whitelaw of Fox Sports Asia and spoke about her opponent potentially missing weight.

“That is something that my management team is working on currently. That’s not something I’m focused on. I’m focused on fighting Joanna Saturday. That’s my main focus. I hope she is professional enough to make the weight and put on a show for the people who come to watch Saturday,” Waterson said.

“We knew it would be hard for her to make the weight coming from 125lbs after fighting Valentina Shevchenko, putting muscle on, and not just putting on regular weight, actual muscle. With the extent from how long it’s been since she’s fought it’s going to be rough for her. But we figured if she wanted to have the advantage of being the bigger girl that she would sacrifice and make the weight. Joanna has ever had problems making weight before, so we didn’t think it’d be a problem. Now here we are. It’s not my concern. I can only worry about what I’m in control of and that’s getting my hand raised on Saturday.”

Waterson was asked if she would still fight Jedrzejczyk at a catchweight if she missed weight. She said yes, she would.

“But yes, I would still fight her. I prepared for her. I don’t think Joanna’s bones are going to grow any bigger. I knew she was the bigger girl. I’ve fought bigger girls before.”

Waterson also added that she is open to fighting at UFC 244 — “the BMF card,” as she calls it — if the fight with Jedrzejczyk doesn’t work out for this weekend. Hopefully, though, it doesn’t come to that.

If you were Michelle Waterson would you fight Joanna Jedrzejczyk at a catchweight?

The post Michelle Waterson reacts to reports of Joanna Jedrzejczyk missing weight: ‘I would still fight her’ appeared first on | BJPenn.com. 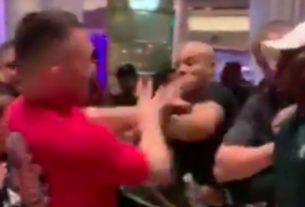