“The guy has some great knockouts, has fought some really good guys,” Thompson told MMA Junkie. “He’s on a six-fight winning streak. (He’s) kind of like a Dutch kickboxer style, but good everywhere. It’s almost like I fought him before in Masvidal – very similar styles. Good everywhere, good wrestling, good jiu-jitsu, but with guys like that, you’ve got to be ready everywhere. But I feel that he’s going to want to keep this fight standing, so I don’t mind that at all.”

Despite losing three of his past four, Thompson is not deterred. He failed to capture the welterweight title on two occasions against then-champion Tyron Woodley, first going to a majority draw, then losing a majority decision in the rematch. He rebounded with a win over Masvidal, but has dropped his past two with a narrow decision loss to Darren Till, then his first career knockout loss at the hands of Anthony Pettis.

They are all unfortunate circumstances for “Wonderboy,” who still has his eyes set on the title. And taking on a hungry competitor like Luque is the exact kind of motivation he needs to get back to the top.

“For me, I want to be the best fighter in the world,” Thompson said. “That title is still right in the forefront of my brain. I know I can win, I know I can fight for the title again here soon, and with a good win over Vicente Luque, I could be there very soon.”

Luque has boasted an array of finishes on his resume, both by knockout and submission, and despite engaging in a few recent standup wars, Thompson thinks Luque will eventually try and drag things to the ground.

And he’ll be ready for it.

“Oh, it’s going to be a standup war,” Thompson said. “Of course, there’s always some part of me thinking at some point in time, he’s going to be wanting to shoot for my legs – at least try and get me up on the fence to try and tire my arms out like you’ve seen other fighters do in the past. So I’m ready for whatever. I think he’s going to want to try and make a statement, try and knock me out, work his way up the ladder, keep the fighting standing – so I’m excited for that.” 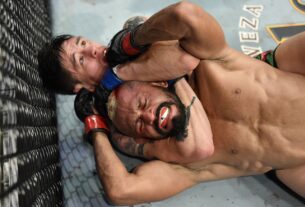