‘Jacare’ Represents The Last Of The Middleweight Invasion

This Sat. night (Nov. 16, 2019), longtime 185-pound contender, Ronaldo Souza, will make his light heavyweight debut in the UFC Fight Night 164 main event, in what is expected to be the last of the division’s middleweight invasion.

Now that things have settled down, the only unknown variable remaining is the future of Souza. “Lionheart” and “Maretta” have both shown potential at 205 pounds, though we can’t say the same for Rockhold and Weidman, who got smashed when transitioning to their new home.

It’s hard to say why the industry has shifted. In the old days, most fighters dropped down a weight class to gain an increased advantage in size. Some old timers, like former lightweight champion Frankie Edgar, are still playing by those rules. “The Answer” is expected to make his bantamweight debut against Cory Sandhagen in January.

Maybe it was the new rule from United States Anti-Doping Agency (USADA), which recently banned IV rehydration. Or perhaps fighters grew tired of wearing out their bodies (and drying out their brains) by way of extreme weight cuts, which can lead to poor performances and longterm health problems.

I think in the case of Souza, we didn’t see much of that. The Brazilian was finished just once over the last 10 years and that came against former middleweight champion Robert Whittaker. What we did see, in uninspired losses to Kelvin Gastelum and Jack Hermansson, was a once-great fighter who looked like a much older version of himself.

Probably because he is.

Souza turns 40 in December and when you start to compile the bouts in UFC, Strikeforce, DREAM, and even Jungle Fight, you’re talking about some serious miles on those combat sports tires, and we haven’t even taken into account his days on the grappling circuit.

Regardless of how his light heavyweight debut pans out, Souza has carved out a pretty remarkable run, evolving from dangerous grappler to all-around MMA fighter, good enough to be considered one of the best in the world during his fighting prime.

Is he on the backside of his career?

We probably won’t know that until the cage door closes in Sao Paulo, but if we learned anything in his performances against some of the sport’s heaviest hitters, this headlining fight may not need those extra two rounds.

To see who else is fighting at UFC Sao Paulo click here. 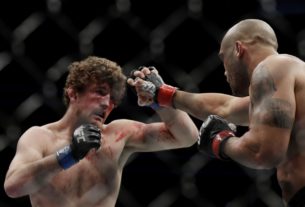 Jared Cannonier On Standby In Case Darren Till Misses UFC 244