It’s been 15 years since most MMA fans have had a chance to see Alberto Del Rio (Alberto Rodriguez) fight for the now-defunct Pride FC promotion. Over that time, Del Rio continued to fight on the regional level and focus on his career as a professional wrestler, which has taken him all over the world for companies like the WWE and Impact Wrestling under the Alberto Del Rio and Alberto El Patron personas.

Most recently Del Rio joined the front office of Combate Americas, but the desire to fight remained, and thus on Saturday in Hidalgo, Texas, he will make his return to fighting to face UFC legend Tito Ortiz in the main event of Combate Americas: Hidalgo.

Speaking to MMAWeekly.com, Del Rio discussed his decision to return to MMA, why Ortiz is the perfect opponent, and what his plans are for 2020.

MMAWeekly.com: Firstly, Alberto, tell us about your decision to return to fighting and what made now the right time to do so?

Alberto Del Rio: When I started working with Combate being around the fighters and watching every single fight, every single event, it was always making me feel like I could do it one more time. I was focused on stuff with the company and taking care of my business and doing pro wrestling shows. That was just an idea in my head but never really, really went for it.

After going through a difficult time in my life when I got divorced and got into that horrible custody battle for my children, it made me rethink about my life and the people that had been there with me in the difficult moments in my life, and the Combate Americas organization were there for me. When I put all of that behind and said to myself, “How would I repay these people who have been there?” The answer was taking one more fight.

I knew that if I were taking one more fight we could get a PPV for the company, we could get more sponsors, more TV deals, and that is one of the reasons I decided to go for it.

MMAWeekly.com: Is training much the same or very different than it was the last time you were actively fighting?

Alberto Del Rio: I went back into the gym to get back into fighting shape. I’ve always been in shape, but there’s a difference in being in shape for the mirror and being in shape for a fight. After being in the gym and seeing I still have it, and I still have the hunger to compete, and my body was reacting in a perfect way to all the stuff you’re going to do to fight on a professional level, I decided to come to Arizona and start my training camp.

The core of MMA has evolved and changed a lot from those days when I was fighting in Japan 14 years ago. Fighters are more compete, are more well-rounded: they know how to strike, they know wrestling, they know Jiu-Jitsu. Back when I was in Japan, I was focusing on my wrestling and taking people down and just holding them down, but now I’m working on all the aspects that you have to work if you plan on becoming an MMA fighter or coming out of retirement like I did. You have to train the way MMA athletes train these days.

Not just the way to train, but how you help your body recover (has changed); back in the day we didn’t have the hyperbolic chambers, altitude chambers or cryotherapy; all of those things that we have and enjoy today.

MMAWeekly.com: What made Tito Ortiz the one you wanted to face for your return?

Alberto Del Rio: When we started talking about me taking one last fight, I had one condition only: it was to fight somebody with a name, like the name of Tito Ortiz. Luckily for us, Tito Ortiz was not under a contract with any other organization, and when I found out I said I wanted Tito Ortiz.

He’s the perfect person for me. He’s a legend in the sport and he’s a great fighter. We are pretty much the same age, same weight, and in fighting someone like Tito Ortiz will inspire all those Latinos, those Mexicans, who want to do something spectacular in their lives, regardless if it’s pro wrestling, MMA, or any other job. With everybody is talking about Combate Americas and what they are doing.

MMAWeekly.com: In the time since you crossed over from professional wrestling to MMA the practice has become more widespread with athletes going back and forth between both sports. Is this a trend you think we’ll continue to see going forward?

In most sports you can make good money if you have good personality, like with Ronda (Rousey), bringing that personality to pro wrestling. Some pro wrestlers are great athletes, were competitors in different sports, so that way they have the skills and athleticism to compete in a demanding sport like MMA is.

MMAWeekly.com: Thanks for taking time out for us, Alberto. Tell us what you have upcoming in 2020 as we finish up.

Alberto Del Rio: I’ve been with Combate Americas since the first event in Las Vegas, Nevada. I was there. This is home for me. I’ve been to pretty much every single Combate Americas throughout the world. After this fight I will continue doing what I’ve been doing with the company for six years.

I also have my pro wrestling company in Mexico, Nacion Lucha Libre, we have one of the best TV deals down there in my country, and I want to continue running that company the way we’ve been doing for the last six months.

I’m going to continue doing what I love. That was the main reason I decide to leave the biggest pro wrestling organization in the world; I wanted to do my own thing, be my own boss, and that’s exactly what I’ve been doing these last three years. 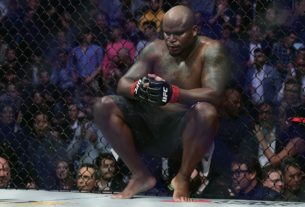