Former UFC strawweight champion Jessica Andrade believes that she can shake up the flyweight division.

SPOILER ALERT: She already has!

With her win over No. 1 ranked Katlyn Chookagian at UFC Fight Island 6, Andrade made a significant splash in the deep end of the flyweight pool. Though she may have to take another fight in the meantime, Andrade is easily poised for a shot at the UFC flyweight title.

Current 125-pound champ Valentina Shevchenko is currently slated to defend against Jennifer Maia at UFC 255 on Nov. 21, but Andrade would be a threatening challenger no matter who wins.

Listen to everything Jessica Andrade had to say at the UFC Fight Island 6 post-fight press conference. 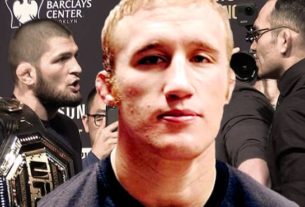 Khabib locked down in Russia, UFC 249 could featured Tony Ferguson vs. Justin Gaethje