LAS VEGAS – It certainly isn’t the way he wanted to find himself in a featured slot at this weekend’s UFC 260 event, but Vicente Luque is happy to take it.

“It’s not the way I wanted it, but I’m grateful anyway to get this opportunity, and yeah, it makes it more fun,” Luque told MMA Junkie at Wednesday’s media day. “More people are going to be watching. More eyes on me, and I can go out there, do what I do, have a great fight, and it’s going to be fun, for sure.”

It’s certainly a meaningful fight in the UFC’s 170-pound division. Luque sits at No. 10 in the latest USA TODAY Sports/MMA Junkie welterweight rankings, while Woodley is ahead of him at No. 7.

While Woodley has endured a three-fight skid in recent times, those results have come against current champ Kamaru Usman, and recent title challengers Gilbert Burns and Colby Covington. Luque has repeatedly insisted he doesn’t see a spent fighter stepping in against him on Saturday night.

Vicente Luque on cornering Gilbert Burns vs. friend Kamaru Usman: ‘It was kind of intense’

Vicente Luque sees Tyron Woodley as ideal test to reach top five: ‘I need a fight like this’

A win would certainly move Luque forward in the division. At an impressive 12-2 in his past 14 appearances, his only setbacks during that run came to Leon Edwards and Stephen Thompson, who both sit ahead of him in the rankings. Colby Covington is another viable option, as well.

Luque said he intends to fight them all, at some point. And with a big win at UFC 260, he thinks fans will be demanding those matchups.

“I do feel it is a different energy in a way in the sense that I know people are going to have more eyes on me, and I know what I’m capable of doing,” Luque said. “I know that the real hardcore fans know who I am. They know my style, and that’s what everybody’s going to get to watch Saturday night, and yeah, I think it’s going to be a great night for me.”

To hear the full interview with Luque, check out the video above. 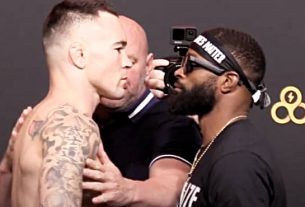