John Lineker secured his third-straight victory in One Championship just moments ago (April 21, 2021).

The veteran power puncher faced short-notice replacement Troy Werthen in the main event of ONE on TNT 3. These Wednesday night One Championship cards have been providing exhilarating main events, and this was no exception. As is his usual fighting style, Lineker wasted zero time in walking into the pocket and firing bombs.

Credit to Werthen, who ultimately suffered the first loss of his professional career, as the Southpaw wrestler was tough. He ripped some body kicks and landed a few left hands of his own, but he simply couldn’t deter Lineker. “Hands Of Stone” walked forward and targeted the body over and over, landing heavy shots that would have finished lesser opponents.

Just as it seemed Werthen could handle his opponent’s power, he walked directly into a straight right hand that sent him to the mat. A single hammer fist was all that was necessary to fully seal the deal.

In all likelihood, Lineker will finds himself in the cage opposite One’s Featherweight kingpin Bibiano Fernandes sooner than later.

BTSport knocked it out of the park with this Jorge Masvidal promotional clip.

How do you go from the King of Split Decisions to the Landlord of the Shadow Realm?

This is a genuine improvement over Triller Fight Club.

The next Triller Event. https://t.co/s6p6BIOjfM

It’s easy to get lost in the spectacle that was last weekend, but how insane is it that a push at weigh-ins seriously injured Drakkar Klose? That’s a real truth-is-stranger-than-fiction moment.

After some back and forth, the UFC has agreed to pay @drakkarklose his show money following last week’s incident where he couldn’t fight Jeremy Stephens on Saturday after he was pushed at the weigh-ins, I’m told. No win bonus, just show, per sources.

Some interesting insight into the creation of “Fight Island!”

This New Yorker profile of Endeavor’s Ari Emanuel is illuminating for a lot of reasons, but especially where it touches on the UFC. An alternate version of events from Dana White’s ‘I have secured an island and it’s very expensive’ narrative. https://t.co/jwAfATZzYN pic.twitter.com/tXiPNrpjDu

Look, I have no counter to Team Alpha Male jokes. We deserve them.

John Wayne Parr is a veteran’s veteran, so I think we can afford him the benefit of the doubt on this scale fail … and well, the fight didn’t work out well for him anyway.

It can be tough to get out of a bad spot once the knees start landing. 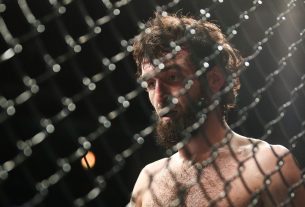 Zabit Returning To Russia, No Fight On August 29th