Coming into 2021 with an undefeated record, strawweight Tabatha Ricci was looking to keep her winning ways going when she faced Vanessa Grimes at LFA 95 this past January.

For Ricci it didn’t take long to establish herself as someone to watch in her new promotion, submitting Grimes just 67 seconds into the first round of their bout.

“I just fought Vanessa Grimes at the end of January and it was a great fight for me,” Ricci told MMAWeekly.com. “It was a great experience. I think she was a great opponent. I’m very thankful for her to take the fight.

The win over Grimes was Ricci’s second since returning to MMA in 2020 following several years competing in SEIZA competitions. Ricci doesn’t feel like the time away from the sport has affected her in the least.

“I did it not affect (me) because I had a good camp to work on my holes and improve more of myself and to get way more sharp for the next one,” said Ricci.

“I have been working everything now, but I really enjoy the wrestling because I use my Judo together. I’ve really focused on my wrestling and stand-up, and I’m really excited to show people what I’ve been training.”

“She looks like a very good fighter with her background in Jiu-Jitsu and some titles in kickboxing I guess, so I’m looking for do my best and stick to my game plan and try to get an impressive win,” Ricci said of facing Ormsby.

While Ricci is looking forward to a big 2021 for herself, the main thing on her mind right now is her fight with Ormsby. It’s only after Friday will Ricci shift her focus to what’s next.

“I work on my mental (game) and I try to blank my mind,” said Ricci. “I don’t focus too much on the media and show, it’s not my style. I just try to be myself, work with my coach, and focus on the game plan, my fight, and nothing else. 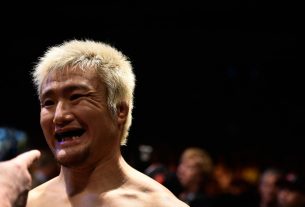 Gomi Returns For RIZIN 26 In Japan

What will Alistair Overeem do after fighting? ‘Crazy hobbies’ or grappling matches