While preparing for his upcoming fight at the RVCA Training Center, Strickland engaged in a grappling-only session with Abu Dhabi Combat Club champion Sanchez and things got testy between the two.

Sanchez tied up Strickland’s arm in a grappling exchange, which infuriated the UFC middleweight. Strickland broke away by throwing a spinning backfist and a front kick at Sanchez’s body and completely lost his cool. Strickland thought it was a “dirty move” that could have jeopardized his upcoming headliner vs. Uriah Hall on July 31, causing him to lash out at Sanchez and eventually walk away from the training session.

Strickland currently is enjoying the best run of his career. Since returning from a major motorcycle accident in October 2020, Strickland has racked up three straight wins, most recently a unanimous decision over Krzysztof Jotko in May. He will headline his first UFC event when he meets “Ultimate Fighter” finalist Hall next month. 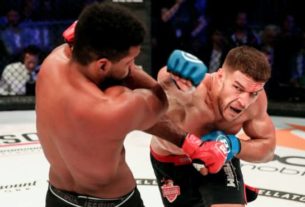