Robbie Lawler is preparing for a better version of Nick Diaz than anyone has ever seen at UFC 266.

Lawler (28-15 MMA, 13-9 UFC), a former UFC welterweight champion, is tasked with the assignment of welcoming Diaz (26-9 MMA, 7-6 UFC) back to the octagon from a nearly seven-year hiatus when they meet in a featured welterweight bout on the Sept. 25 pay-per-view card from T-Mobile Arena in Las Vegas. Prelims air on ESPNNews and stream on ESPN+.

The contest also doubles as an anticipated rematch. Lawler suffered a second-round knockout loss to Diaz at UFC 47 in April 2004 in what was his first career stoppage due to strikes. The chance to run it back excites Lawler, he said, but it’s not something he was seeking out. He’s by no means stewing over the outcome from 17 years ago, and he said he doesn’t take anything positive or negative away from that experience.

“Getting a fight, getting a win vs. him it doesn’t really matter what happened in the past – 17 years later it’s almost like it never happened,” Lawler told MMA Junkie on Wednesday. “Obviously we’re very young at that time. He took the fight to me, hit me with some good shots and it wasn’t my night. I’ve grown a whole bunch. He’s developed his skills. It’s a different fight. Same guy, just a little different.”

There is plenty of historical subtext to Lawler vs. Diaz 2. It’s the longest gap between a first and second fight between athletes in UFC history, and it will also mark just the second time the company has put on a five-round fight that’s neither a title nor a main event.

Lawler said didn’t hesitate to accept a five-round bout. And despite having nine fights scheduled for 25 minutes during his UFC career, he doesn’t think it gives him much of an advantage, either.

Diaz is famously known for his durability and cardio, and Lawler doesn’t anticipate much change, even without having stepped in the octagon since January 2015. Diaz has experienced some troubling moments outside the octagon during his layoff, but all signs to him being in excellent condition ahead of UFC 266.

Lawler said he doesn’t foresee a dramatic drop-off in Diaz’s skills after the time off, and in fact, thinks it’ll be an upgrade from what he’s displayed in the past.

Video: 17 years later, what can we even expect from the Nick Diaz-Robbie Lawler rematch?

Video: Get hyped with the perfect promo for Nick Diaz vs. Robbie Lawler rematch

Although much of the spotlight will rightfully revolve around Diaz’s comeback going into UFC 266, it’s an equally or arguably even more important bout for Lawler’s career. The 39-year-old has lost his past four fights – albeit against top-tier competition in Neil Magny, Colby Covington, Ben Askren, and Rafael dos Anjos – and has just one win dating back to July 2016.

“Ruthless” hasn’t competed since August 2020, and said at this point in his life he’s only eager to fight if it gets his juices flowing. The rematch with Diaz is one that ticked all the boxes for Lawler, and he has the utmost motivation to get back in the win column in a marquee bout.

“I think it’s going to be an exciting fight,” Lawler said. “Nick always comes to fight, he looks to get in your face. He’s a really good counter-puncher. He’s in shape. He can do it all, too. Good ground game, good stand-up. He comes to fight and he’s in shape. So I need to go out there and make sure I’m crisp and sharp and getting in there and getting my blows in.” 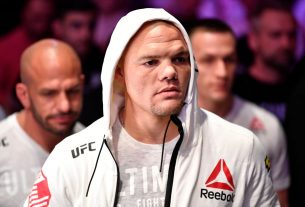 Smith Ready To Beat The S—t Out Of Walker