Conor McGregor opens as a massive favorite in a boxing match against Machine Gun Kelly should the two meet in a celebrity boxing match.

McGregor and Kelly had an altercation at the 2021 MTV Video Music Awards (VMAs) red carpet, which took place outside the Barclays Center in Brooklyn, New York on Sun., Sept. 12.

Who would win in a fight: (Bovada)

Bovada released its odds for a celebrity boxing match between McGregor and MGK with “The Notorious” one coming out as a decisive favorite over the rapper and pop-punk artist. The former two-division Ultimate Fighting Championship (UFC) titleholder opened at -5000 against Kelly’s +1000. This means a bettor would need to wager $5,000 on McGregor to win $100. On the flip side, a successful $100 bet on Kelly would earn you a $1,000 profit.

There are various reports as to what instigated the confrontation between McGregor, 33, and Kelly, 31. Footage captured from the incident shows McGregor lunge at Kelly — with many security guards in between them — and throw a drink towards the musician. A new report suggests that McGregor was sending private direct messages to Megan Fox, MGK’s girlfriend, on social media.

McGregor (22-6) is currently recovering from a broken leg (watch here) suffered in a trilogy fight against Dustin Poirier that took place at UFC 264 on July 10. 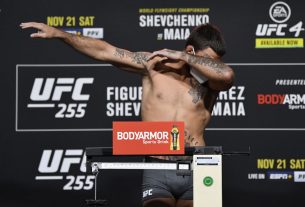 Video: Is a title shot next for Carla Esparza – and if so, should it be?