“Where Was That Ass Whooping You Were Bringing For Me?’

Don’t disrespect Anthony Smith leading up to a fight or he’ll disrespect you right back, right after beating you in the cage.

Leading up to UFC Vegas 37, the UFC aired a pretty intense promo for the main event featuring Ryan Spann talking a whole lotta smack about Anthony Smith. Smith later claimed he found the whole thing funny, like Spann was trying to hype himself up for the fight. Did the smack bother “Lionheart”? Not at all, he claimed.

Well, after dropping Spann in the first round and then locking in the rear naked choke submission 3:47 into the fight, Smith got real aggressive and started yelling at Spann (watch video of the incident here). Security was called in, and it looked like a brawl might break out. Cooler heads prevailed, but it certainly revealed that Smith did end up feeling pretty disrespected by Spann’s pre-fight theatrics.

“Let’s not pretend like Ryan Spann wasn’t going to rub that s—t in my face if he beat me,” Smith said during the UFC Vegas 37 post fight press conference. “I wasn’t even trying to rub it in his face. That was just my first initial reaction. The second he tapped and the ref was pulling me off, my initial reaction was where was that ass whooping that you were bringing for me? That was my thought. That’s what’s been running through my head since he said it.”

“Maybe I’m on some Michael Jordan s—t where I’m making s—t up in my head and I’m making a mountain out of a molehill, just cuz that’s what I need to do. I don’t know. The fact is it genuinely bothered me so that was emotional reaction immediately but I’m glad we got it over with. He said it, he’s trying to feed his family, I’m trying to feed mine. We both really, really wanted this. It’s just part of the game.”

The core component of Smith’s anger came from the lack of respect.

“Maybe this is going to sound arrogant or pretentious but I have earned the respect from my peers,” he said. “I put a lot of work into this game. I’ve sacrificed my entire adult live to be here, to be in the position I’m sitting in right now. That’s time with my kids, that’s friendships, that’s life opportunities. I could have been a goddamn surgeon by now. I’ve put a lifetime of work into this, and most of my peers respect me. That’s all I ask.”

Smith also had a bit of a chip on his shoulder regarding disrespect from the press, who continue to label him a gatekeeper.

“Who do I gotta beat?” he asked. “What do I gotta do? That’s an honest question: who do I gotta beat? I beat the old guys, and people said they’re too old. Now I’m beating the young guys, and they’re not ranked high enough. What the f—k do you want me to do? At this point, I don’t give a f—k anymore. I’m doing what I can do. I’m fighting the guys in front of me. I’m f—king over it. I’m done worrying about it.”

“I care because I want people to recognize my sacrifice, or I did,” he finished. “Now I don’t give a s—t. I don’t care. I’m going to do my own thing and f—king like it or not, I’m here.”

I dunno, sounds to us like he still cares. And hey, that’s a good thing. An emotionally engaged Anthony Smith is a dangerous Anthony Smith. This is “Lionheart’s” third fight to end before the second round starts, and these are numbers that are hard to disrespect. If his next opponent is wise, he may want to come in a bit more low-key. 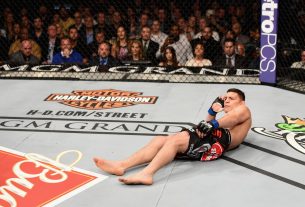 White Not Sold On Diaz Return