Skip to content
Valentina Shevchenko doubts Lauren Murphy has figured her out: ‘It’s kind of hard to surprise me’

LAS VEGAS – Valentina Shevchenko has been around the block, so the skillset Lauren Murphy brings to the table she doubts will come as a surprise.

At UFC 266, Shevchenko (21-3 MMA, 10-2 UFC) will seek her sixth consecutive women’s flyweight title defense against the first-time challenger Murphy (15-4 MMA, 7-4 UFC). Though she respects the skillset of every opponent, Shevchenko fails to see where Murphy stands out compared to past competition.

“(One of the) more durable athletes that I’ve ever seen? I doubt (it),” Shevchenko told MMA Junkie at a pre-fight news conference Wednesday. “More technical? I doubt. More well rounded? I doubt. I don’t know. For all the years that I was fighting, it’s kind of hard to surprise me with something special if you are not a superhuman. I know she is well-rounded. I know she is strong. I know she is dangerous. This is everything that I have to know about her. But something special that I could put pressure on my shoulders? No.”

Despite her confidence that she is a step above her UFC 266 title challenger, Shevchenko emphasized how she’s not complacent. Her dominant reign as champion hasn’t weathered her enthusiasm – nor her pre-fight nerves.

“It’s every time special,” Shevchenko said. “It’s special because of the training, preparation, and everything. No matter how many times you fight, if you’re in the right mood, you’re going to feel all nervous all over again and again.”

Remaining grounded is important to Shevchenko, who doesn’t ponder where she’s at in her career. If she puts a cap on when she expects to be done fighting, Shevchenko thinks it’ll play out as a self-fulfilling prophecy. As far as she’s concerned, she’s here to stay with no end in sight.

“I think that if people already put a plan (or) limit to their career, they are down already because it’s kind of like they’re starting to count minutes, seconds toward their end,” Shevchenko said. “I don’t want it to happen. I want to do everything as I can, the best way that I can, the most time as I can. That’s why I don’t put nothing in front of me like, ‘Oh, this certain age, I’m done.’ I don’t want the beautiful time of my life that’s going to be ended soon. I just want to extend it as much as I can.”

Photos: Valentina Shevchenko through the years

Valentina Shevchenko doubts Lauren Murphy has figured her out: ‘It’s kind of hard to surprise me’ 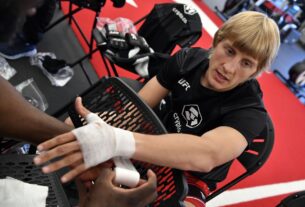 Paddy ‘Not Fighting Top Ten On The Money I’m On’