Top-ranked strawweight Carla Esparza considers herself next to challenge for the 115-pound strap and believes recent events have solidified that notion.

Prior to the rematch booking between Rose Namajunas and Zhang Weili, some briefly linked Esparza to fighting for gold. After all, the UFC veteran is on a five-fight winning streak. The 34-year-old showed out in her last fight when she dominated Xiaonan Yan violently after trapping her in a crucifix.

“The Cookie Monster” insists that her win over Marina Rodriguez cemented her as the #1 contender. Esparza believes this to be true especially after Rodriguez defeated Mackenzie Dern at UFC Vegas 39 over the weekend. Esparza and Rodriguez met on Fight Island in July of last year. The fight was close, though Esparza’s grappling narrowly sealed the victory despite taking some damage.

Speaking with MMA Junkie, Carla Esparza described her method of thinking behind where she stands in the packed division of women.

Since there were talks that Dern could potentially contend for a title if she beat Rodriguez, Esparza too believes she’s within arm’s reach of coveted gold. She already has a win over the dangerous Rodriguez, so it seems there is little incentive to run that fight back right now. In the meantime, it appears Esparza is hungrier than ever for another crack at gold.

“Of course I want the title fight. Esparza said. I’ve been fighting for seven years to get back to this point, but I also want to stay active and fight because that’s what I like to do, so hopefully, it goes in a way that makes sense for the UFC to give me the next fight.”

Namajunas will attempt to defend her title at UFC 268 on Nov. 6. Esparza holds a rear-naked choke finish victory over Namajunas from many moons ago, so the strawweight is sitting in a great spot for her. Surely, if any last-minute changes happen with the UFC 268 strawweight title fight, Esparza should be on Dana White’s speed dial.

Do you think Carla Esparza should fight for the title next?

Sean Shelby’s Shoes: What’s next for ‘Jacare’ Souza after UFC on ESPN+ 22 loss? 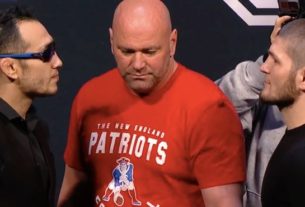