‘Drunk’ DC Calls Out Till For Accusing Him Of Bias

Daniel Cormier got a little hot under the collar after Darren Till suggested he wouldn’t call Oliveira vs. Makhachev without bias.

Over the last few months, Cormier has been dogged by accusations that he’s sided with one fighter over another, or that he just wants to see certain fighters lose. Phil Hawes went so far as to get in DC’s face over perceived favoritism, and Cormier has had to put up with Sean O’Malley suggesting he has some sort of jealousy issue or something.

So all this random negativity may explain why Cormier went a little overboard in his response to a typical Darren Till s—tpost on Twitter.

“Charles Vs Islam, what a fight,” Till wrote. “Just don’t let DC commentate.”

Islam Makhachev trains at American Kickboxing Academy alongside Cormier, and Islam’s coach Khabib Nurmagomedov is one of DC’s close friends. The insinuation that Daniel Cormier couldn’t be impartial as a commentator was too much for him to take, and he lashed out on social media.

“Darren I expect better from you,” he wrote. “I’ve called multiple teammates fights. And honestly my commentary doesn’t affect the judges or anything honestly. Most times my team is mad at me because they feel I am too much in other direction. Do better Till!”

Darren I expect better from you. I’ve called multiple teammates fights. And honestly my commentary doesn’t affect the judges or anything honestly. Most times my team is mad at me because they feel I am too much in other direction. Do better Till!

Till immediately backed off, writing “I was just joking, I only said it for likes and retweets. Hope to see you there commentating.”

“I forget who I was talking to,” Cormier replied. “I am sorry I was drunk lol.”

I forget who I was talking to. I am sorry I was drunk lol

While that’s certainly a refreshing change from how Twitter beef usually spirals out of control, what is Daniel Cormier doing letting this kind of mild stuff get under his skin? In contrast, DC’s commentary partner Dominick Cruz outright ripped into Cormier’s booth work, saying he doesn’t study enough before fights. And Cormier defended Cruz!

I just wish everyone would just stop twisting Dominic words man. It’s frustrating, we’re friends I know you heard him tell me he loves me yesterday at the end of our interview. No one could fake that pic.twitter.com/yYUUBI4gym

Still no word on how Cormier took this public bashing from Michael Bisping for suggesting Ode Osbourne was beating Tyson Nam at UFC San Diego. Even after Nam sparked Osbourne and knocked him out, Cormier can still be heard in the background trying to get the last word in.

Daniel Cormier is doing a really good job of getting his name and opinions out there through his YouTube channel and social media accounts. He’s getting solid views and engagement, but that comes with a price: as they say, you ain’t nobody until you got haters.

So if he wants to keep stacking those numbers, he better get a thicker skin and accept the fact that some days he’s gonna be the Dude Who Said Something Wrong On The Internet. Maybe he can speak to Joe Rogan about it for tips on how to handle it, if anyone’s the G.O.A.T. in that category, it’s Joe. 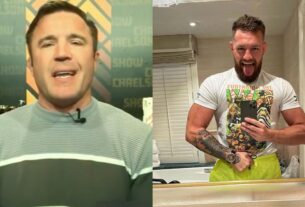