Surging flyweight contender Brandon Royval is ready to jump on a grenade later tonight (Sat., Nov. 21, 2020) at UFC 255 live on ESPN+ PPV from inside UFC APEX in Las Vegas, Nevada, just to prove his worth among fans.

Royval, who will be matched up against No. 2 ranked contender Brandon Moreno in the UFC 255 “Prelims” headliner, has been an exciting addition to the weight class since his arrival earlier this year. In two Octagon appearances, “Raw Dawg” has been able to produce impressive submission finishes over veterans Kai Kara-France and Tim Elliott. Not too shabby for the former LFA flyweight champion.

Still, Royval is just getting started in the promotion and is eager to show fight fans what he’s all about. It starts tonight at UFC 255 against Moreno, who is as game as they come at the 125-pound level.

“I get it I am jumping the rankings. You guys don’t know me yet, you guys know nothing about me. I like that and I get that. Keep betting against me it makes sense if you bet statistics and you don’t know anything about this dude, bet against him for sure,” Royval told Just Scrap Radio on BJPENN.com. “That being said, do your homework. How is he going to beat me? Is he going to sub me? No, that is not a f—king option. Is he going to knock me out? Brandon Moreno hasn’t knocked anybody out that is not an option either. I mean if you are betting on a finish I wouldn’t be betting him.

“It is what it is, I am excited to prove people wrong but I am more excited to gain fans,” he continued. “I know what I bring to the table and the excitement I bring. If you are not going to bet me this fight, maybe you will bet me next fight.”

Royval, 28, is a finishing machine. The Factory X product has produced 11 finishes in just 12 career wins and has all the ingredients to become the first fighter to stop Moreno. However, Royval is playing it smart and won’t be aiming for a stoppage this weekend. Instead, he’ll aim to dominate Moreno from the opening bell and show his overall dominance.

“I definitely see this fight going the distance. But, I thought my last fight would too,” Royval said. “I mean, I think I have more of a finishing tendency than anyone he has faced. I am more of a finisher and can capitalize on a quick mistake he does. He is a tough dude, he is Mexican, too. I don’t see him being finished at all. It will be 15 minutes of me whooping his ass.”

If Royval is able to get past Moreno and push his Octagon record to 3-0 it may very well lead to a shot at current UFC flyweight champion Deiveson Figueiredo, who meets Alex Perez atop the UFC 255 PPV main card. While former UFC bantamweight champion Cody Garbrandt may still have the inside track to rebook his scrap with Figueiredo it isn’t completely out of the question to have Royval slide in should “No Love” pull out again.

What do you think, fight fans? Can Royval be the first guy to finish Moreno? If he does is that enough to warrant a UFC title shot? 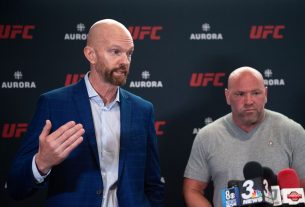 Yes, USADA Will Be Present At UFC 249