Elvin Brito and Luis Palomino, and Uly Diaz and Francesco Ricchi all made weight on Thursday for their respective title bouts taking place in the main and co-main event of Friday’s BKFC 26. The event is set to go down at the HardRock Hotel and Casino in Hollywood, Fla.

Additionally, the two former UFC veterans that will be featured on the card also were on weight.

Bec Rawlings returns to bare-knuckle boxing to take on BKFC star Britain Beltran in a women’s flyweight bout. Rawlings, a former BKFC champion, hasn’t competed in the sport since 2019. She’s 3-0 in the company.

Also, former UFC bantamweight contender Jimmie Rivera makes his debut against Howard Davis. It will be Rivera’s first fight since his UFC departure in August 2021.

Below are the full results for the BKFC 26 official weigh-ins. 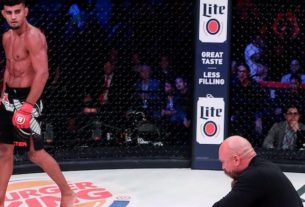 Pros react to Rory MacDonald vs. Douglas Lima 2 at Bellator 232